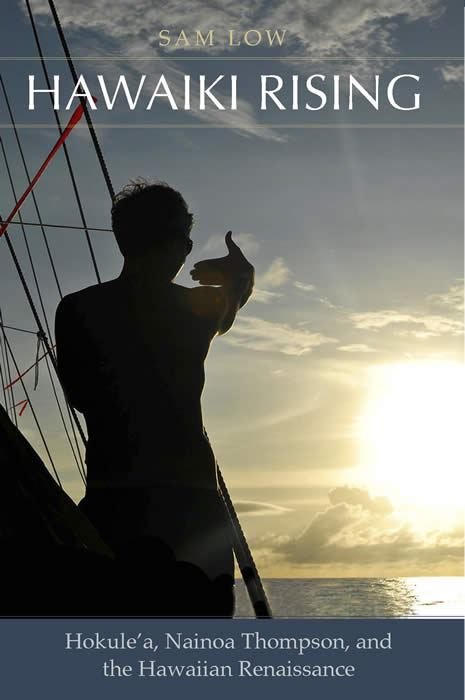 This is a brief excerpt from my book, Hawaiki Rising. I tell the story of a great storm during which the assistance of Hokule’a’s escort boat proved critical for the survival of the canoe. Enjoy. Aloha.

Suddenly the storm was on them. Everyone remembers its approach.

“I looked up and I could see this big black wall coming towards us,” Chad remembers.

“I am looking outside Maui and it is black – all black,” Tava recalls.

“Oh, yeah, I remember the storm,” says Mau. “We pass Maui, whoooo, the storm come blowing from west. That's why I scared because I thinking the wind is going to push the canoe to the island.”

Alex and Gordon Pi’ianai’a conferred by VHF radio. Both had voyaged tens of thousands of sea miles and knew conditions would deteriorate fast.

Mau ordered the crew to take Hokule’a’s spars and booms down on deck.

The storm struck the canoe broadside and it came so suddenly that, for a few moments, the ocean was a confused roiling froth on one side and a millpond on the other.

“I am looking at one side - big waves. I am looking other side – clear and calm,” Tava recalls.

The wind accelerated to gale force.

“It was like somebody hit the light switch – it just went black. The seas went raging - crazy deep seas,” Chad remembers.

Ishka’s mainsail writhed in the wind. Furling it was out of the question so Alex tied it to the boom and hoped for the best. He had built Ishka with his own hands and he had built her sturdy. Off Sydney, Australia, she had survived near hurricane winds. In that same storm, a large freighter had gone down with all hands. Alex knew his boat could withstand almost anything nature could throw at her. She was equipped with an engine that could move her at eight knots or so, but the best speed she could make towing Hokule’a was about five knots - and that was in calm weather. Alex turned into the wind and eased the throttle forward. Ishka pitched in the wild seas. Her propeller cavitated, losing traction, and the engine raced. Alex jockeyed the throttles to prevent overheating. He had given Ishka an oversized prop – eighteen inches in diameter rather than twelve. Now he wished he had installed an even larger one. Looking toward the Hamakua coast, Chad recalls rocks surrounded by churning surf and spume – “like teeth ready to eat the canoe.”

Elsa had sailed almost as much as Alex. When the storm hit, she was below in the galley, preparing dinner. She was aware of the commotion topside, but she was a veteran of many storms. She just braced herself and continued to tend her pots and pans.

Hokule’a’s crew watched their escort appear high atop a swell and then disappear into a trough. Tava stood at the bow, watching the towrope for signs of wear. “I look at the swells and when a big swell comes then we no see the sailboat – we only see the rope.”

“If that rope breaks we’re going to be freaking opihi,” Chad tells him.

Hokule’a and Ishka were now in a classic sailor’s predicament. Caught in a fierce storm off a lee shore, Ishka’s power and Alex’s skill were all that stood between the canoe and the frothing reefs a few miles astern.

Chad watched the distance dwindle. “We were being pushed backwards. The escort boat was pulling us and we were drifting back slowly, slowly, slowly – oh man, it was nasty.”

“I am looking and I no can see the canoe moving,” says Tava.

“I was holding her – but just barely,” Alex recalls.

The strain on the towrope eased as Ishka dived into a trough, then took up when she reappeared. “I look at the tow line,” says Tava, “It is big then it come small. I say to myself, ‘No way – it is going to break.’” Manning Ishka’s throttles, Alex waited for his boat to settle between waves, giving the propeller some grip. Then he gunned her to gain speed.  It was a reasonable plan but he knew it was risky because of the different hydrodynamic properties of the two vessels. Ishka is a heavy monohull designed to sit low in the water. Hokule’a, a lightly constructed catamaran, sits high. Speeding ahead, Ishka would suddenly take a strain on the towrope. Hokule’a would respond by shooting forward and veering to one side, almost overtaking her escort. “That was big trouble,” Alex recalls. “Whenever we tried to speed up, Hokule’a would overrun us and sometimes she was actually beside us. That was very, very dangerous.”

To compensate, Tava and his crewmates struggled to steer the canoe back behind Ishka. “The canoe is going by herself. No way you can steer in the swell. Ishka just tow us. I look at the rope – it is going back and forth - wzzzzz – freaky. Go back – wzzzz – go back – wzzzz. No way we can steer.” Darkness fell. “We no can see the mast – only can see the light on the mast.”

Will tuned Ishka’s radio to the Coast Guard Communication Station at Honolulu and called for assistance. It was not the only distress call that night. A number of vessels were in trouble. Two were sinking. If Hokule’a’s towline should break, it was doubtful that a cutter could arrive in time. Will kept this information to himself. He radioed the crew huddling aboard Hokule’a. “Don’t worry,” he told them.

“Will’s voice over the storm was just real calm,” Chad recalls. “He kept encouraging us and that kept me from going totally bonkers.”

A few hours into the storm, Elsa popped her head above the companionway. “You had better come down and eat something or I am going to throw it overboard.”

“That’s Elsa,” Alex says. “Nothing rattles her – nothing.”

Jo-Anne had confidence in the canoe and her crew, but she was preparing for the worst. “I was thinking that if the canoe started to break up what could I hook up to? I felt that if we all hooked up together by our safety harnesses we at least would be together.”

As the night wore on, the swells built to twenty feet and began to break. “Two big ones rocked the whole canoe,” Chad recalls. “They went over us and I heard Gordon yelling ‘Is everybody okay?’ Then another wave hit us and I remember one guy grabbed me by the shoulders and looked at me with big eyes and a pale face - ‘This is it,’ he yells. ‘This is it.’” “One of the guys panicked,” Jo-Anne recalls. “He wanted to know if the canoe was going to break up.” “I don’t know if it was the wave or that guy who scared me more,” Chad remembers. “He was yelling at me – ‘This is it, this is it!’”

Jo-Anne huddled by the galley repeating ‘Hail Marys.’ “I looked back to Mau,” she recalls. “He was standing near the navigator’s platform on the port side looking at the ocean. His face was very stern and suddenly he made the sign of the cross.” “Big wind,” Mau recalls. “I think more than sixty knots. Wind and rain. Me, I scared because the canoe is close to the Big Island. Big waves. If we had been on my canoe, no more canoe.”

After about four hours, the winds seemed to decrease slightly. Still, Hokule’a and Ishka continued to slowly slip back toward the rocky coastline. “We were losing ground,” Alex recalls. “I thought we might have to swim.” Alex conferred with Gordon by VHF radio. If Ishka could not keep Hokule’a off the coast, Gordon would release the towline.  Ishka’s crew would tie a life preserver to it and Alex would circle Hokule’a to bring the line close to the canoe. Then Gordon and his crew would abandon ship, swim to the rope and be hauled aboard Ishka. “I was worried but you could not show other people that you were worried,” Alex recalls. “I thought that if the engine went out we would be finished. We would have lost our boat and Hokule’a.”

About six hours after the storm hit, Jo-Anne recalls seeing a blue flashing light - the Coast Guard cutter Cape Newagen had arrived. “When they came, they told me it would not be safe to come near Hokule’a or Ishka,” Alex recalls. “They told us to follow them back to Kawaihae.”

Slowly, in abating winds, Alex worked up sufficient speed to begin towing Hokule’a around Upolu Point on the northern tip of the Big Island and into the lee on the western side. Cape Newagen stood by until they were safely on their way to the nearby commercial port of Kawaihae. Once Ishka was moored in Kawaihae, Alex went below to check his engines. Two engine mounts had worked loose and would have to be replaced. It had been a close call. “That storm made me come to grips with the danger of voyaging. If you want to be out there, bad weather is part of the bargain,” Chad recalls. “Anyone can sail in good weather. I had an opportunity to back out of the trip after that. I remember thinking ‘Do I really want to do this again? Do I want to go through that?’”

“It was something you don’t want to go through every day,” Gordon recalls. “The ocean has no conscience. We were our own ‘Magnificent Seven’ on that trip. Everybody just worked as a team.”

“To this day,” says Chad, “on a good day out there in the Alenuihaha channel, I get really scared that something is going to come down hard and just slam the door. It was terrifying. That’s the best way to describe it.”

Hawaiki Rising – Hokule’a, Nainoa Thompson and the Hawaiian Renaissance – is available on Amazon.com.